Firefighters have been called to the rupturing of a 30 inch water main that’s flooded High Street in New Malden.

The flooding covered a half a kilometre square area, and affected 10 domestic and three commercial properties.

Fire crews prevented the water from entering homes in adjoining roads by using sand bags and helped residents to bail water out of their properties.

No residents had to leave their home due to the flooding. 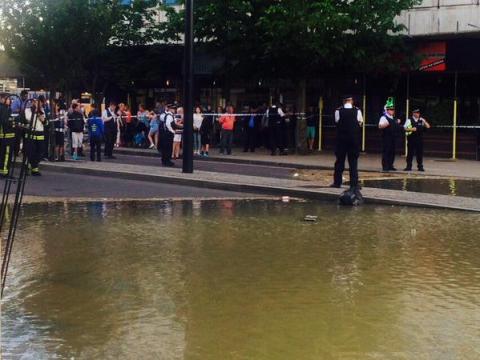 At the height of the incident 10 fire engines and 72 firefighters and officers were at the scene.

As water levels were rising, firefighters worked tirelessly to reduce the impact on the community by positioning sandbags and assisting local residents and business owners. Working in partnership with other agencies and utility companies we were able to deal well with the burst main and return to normality as quickly as possible.

The Brigade was called at 6.49 pm and the incident was over for us at 3.23 am Friday morning.

We can confirm that most of the water in #NewMalden has gone but the road is still closed. @SW_Trains are running as normal

@LondonFire @thameswater @rbk @MPSKingston well done on dealing with the New Malden burst main so quickly and efficiently. Thank you