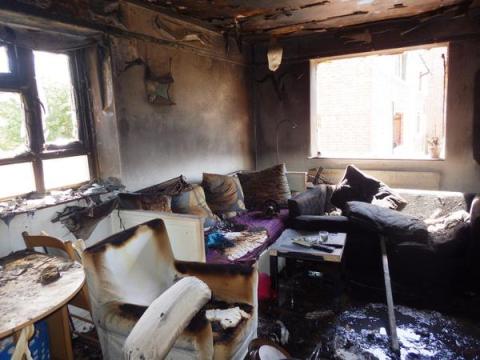 Damage to flat in Muswell Hill. Occupants got out in time because they were alerted by a smoke alarm. Image:@LondonFire

The London Fire Brigade say a smoke alarm made sure the residents of a flat on Colney Hatch Lane in Muswell Hill escaped from a fire in their home on Monday morning.

They were able to get out before the Brigade arrived at the scene.

Two of the occupants, a man and a woman were taken to hospital by the London Ambulance Service suffering from smoke inhalation.

Seven other people left the four-storey block of flats before the Brigade arrived and were uninjured.

A spokesperson for the London Fire Brigade said:

The smoke alarm fitted in the hall of the flat did its job and warned the occupants of the danger facing them and they managed to get out. You should have at least one smoke alarm on every level of your home and test it regularly, as it gives you a vital early warning in the event of a fire.

Firefighters wearing breathing apparatus confined the fire to the lounge of the flat, which was partly damaged by the blaze.

Three fire engines and 14 firefighters and officers from Hornsey and Finchley fire stations attended the incident.

The cause of the fire is under investigation, but it is believed to have started in an electric clothes dryer in the lounge.