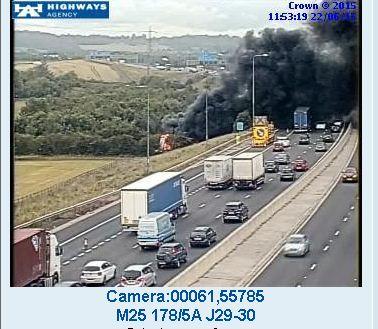 A lorry has been destroyed by fire on Saint Mary’s Lane in Upminster and the flames and smoke closed both carriages of the nearby M25 at one stage.

The lorry’s forty-five foot long trailer carrying a load of cheese was destroyed in the blaze.

Smoke from the blaze affected the M25 between junctions 30 and 29 northbound, which was closed in both directions at the height of the fire.

Three fire engines and 15 firefighters and officers from Hornchurch and Dagenham fire stations attended the incident.

Emergency service social media communicators could not stop themselves from punning the lorry’s connection with its load of cheese.