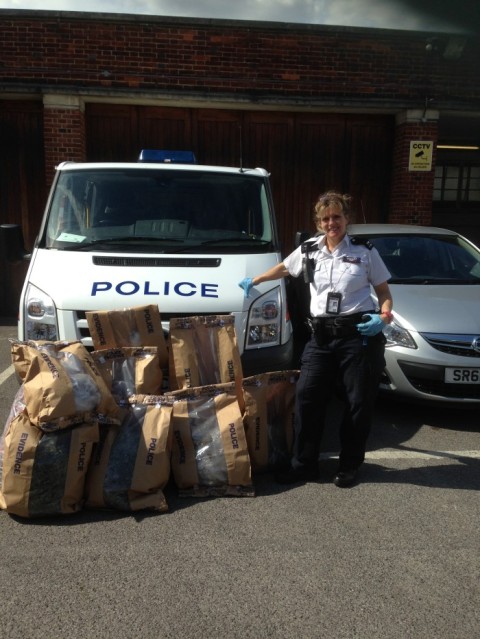 A Twickenham beat officer patrolling her local ward ‘followed her nose’ and has come across 16 laundry bags filled with cannabis dumped in the street.

At 11 in the morning on 23rd June they found a pile of laundry bags in Selkirk Road.

Initially I thought this was someone fly tipping. I began to look into the bags to see if there was any name and address within the bags to ascertain the offender.

However, once I had opened the first bag I could smell the overwhelming whiff of cannabis.

A search of the bags revealed a large amount of dried cannabis leaves, rotting cannabis, gloves and facial masks.

When searched more cannabis leaves were found along with a halogen bulb, gloves, masks, air fresheners and vacuum bag packets.

It took Vanessa and her colleague more than two hours to bag the 25 plus exhibits. It just shows you never know what you may find when out walking the beat!

Enquiries continue to establish where the cannabis came from.

If you have any information please contact Richmond Police on 101 or if you wish to remain anonymous call Crimestoppers on 0800 555 111.