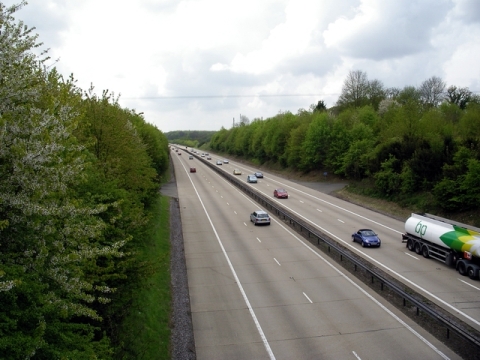 Surrey Police have criticized people stuck in traffic gridlock for Tweeting inappropriate messages while negotiators tried ‘talking down’ a distressed woman on a motorway bridge.

Police objected to what they regarded as ‘completely unacceptable’ social media messages while they tried to help the woman to safety.

The incident caused  the closure of the M3 at Sunbury in Surrey for more than two hours after emergency teams were alerted just after 11 am yesterday.

One Twitter user Tweeted Surrey Police: ‘Tell her to get on with it. Bloody ruining everyone’s weekend. Sat in this for an hour and a half now.’

Another Twitter user wrote: ‘To the person causing traffic jam on the M3/A316, you selfish, selfish twat.’ and added: ‘Surrey police, can’t you rubber bullet the jumper on M3/A316 and get the traffic moving? Or get net ready & charge her? Ridiculous..’

This Tweeter later deleted these comments and apologized unreservedly.

Surrey Police said the woman was detained under the Mental Health Act after being helped to safety from the pedestrian bridge.

Having members of the public taunt somebody who is clearly in a distressed state as we did earlier today is completely unacceptable.
I hope the public understand why it was necessary for us to close the road as doing so helped save the woman’s life.
I appreciate that being stuck in traffic is the last thing that people want to be doing, particularly on a weekend when the weather is hot, but on this occasion it was completely necessary to ensure officers saw this woman to safety.

The vast majority of messages received by Surrey police were sympathetic and understanding and included comments such as ‘hope the woman is going to be ok’ and ‘it’s a life saved…nothing else matters. That was somebodies sister/mum/daughter who is going back to their family safe.’

The emergency services prefer not to release news and information about such incidents, but are sometimes under an obligation when a public interest issue of transport closures or public safety is engaged.