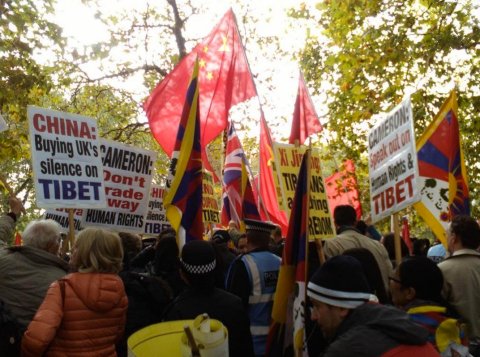 Protesters for various causes waved flags and chanted as the President was paraded along the Mall, London. Image: Al Riddell.

Protesters gathered at London’s St James’ Park as Chinese President Xi Jinping took part in a procession along the Mall.

After the event, Xi Jinping and his wife Peng Liyuan were met by the Queen and other dignitaries at Buckingham Palace.

The Communist leader and his wife arrived at Heathrow Airport yesterday, where they were greeted on behalf of the Queen by Viscount Hood and Foreign Secretary Philip Hammond.

This is the first full day of a four-day state visit to the UK.

The Queen, Prince Phillip and others meet with President Xi Jinping and his wife. Image: Getty.

The visit comes after Chancellor George Osborne’s trip to China last month, where he said it is the government’s intention to make the UK China’s ‘best partner in the West’.

Prime Minister David Cameron says the visit signifies the beginning of a ‘golden era’ in ties between the two countries.

During talks, it is expected that the Prime Minister will raise issues such as subsidised Chinese steel, as well as human rights and the threat of cyber attacks.

Many were excited at the arrival of president Xi Jinping. Image: Getty.

China’s human rights record is a subject of concern for many groups such as Amnesty International.

The organisation had promised demonstrations in London today.

A spokesperson for Amnesty said:

The [Chinese] government has ratcheted up censorship of the internet, clamped down on civil society, increased its ideological controls over the media and academia, and launched several large-scale crackdowns on human rights defenders, lawyers, and activists.

Most recently at least 245 lawyers and activists have been targeted in an unprecedented nationwide campaign over the last 100 days and at least 30 are ‘missing’ or still in police custody.

We don’t shy away from talking about human rights.

What we are against is to use human rights to interfere with other countries’ internal affairs and to try to impose your own system on to others. 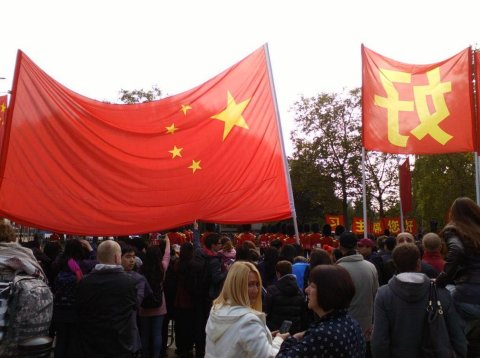 Thousands of supporters lined the Mall to welcome Xi Jinping and his wife with flags, T-shirts, banners and hats.

The cheering and flag-waving masked multiple demonstrations by pro and anti-China supporters.

There were even reports of scuffles breaking out between rival activist groups.

However, Amnesty, pro-Tibet and Falun Gong protesters were outnumbered significantly by hundreds of people shouting ‘Xi Jinping, Xi Jinping’ as the politician was driven past in a golden carriage.

Al Riddell was at the procession earlier today, speaking to some of the protesters: