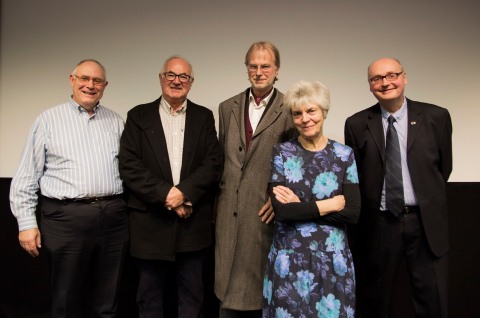 History has been made at Goldsmiths, University of London with the first George Orwell Studies conference held in the College’s new cinema.

Leading academics gave presentations highlighting that Orwell wrote with a great sense of humour, and the role of highly educated and successful women in his life.

Other papers looked at how he had developed as a writer when working at the BBC during World War Two, and his relationship with the politics and culture of the United States.

The conference was opened by the Warden of Goldsmiths, Pat Loughrey, who said that when he was at the BBC George Orwell had clearly been the inspiration for journalism style-books and editorial values.

Quentin Kopp, the son of one of George Orwell’s best friends, joined Richard Blair in discussions about the life and times of the author of ‘Animal Farm’ and ‘Nineteen Eighty Four.’

Goldsmiths and the Orwell Society hope to make the conference an annual event and it was also revealed that Abramis Academic Publishing would be publishing a new George Orwell Studies Journal.

‘“There is Always Room for One More Custard Pie”: Orwell’s Humour.’ Professor Richard Keeble, chair of the Orwell Society and Professor of Journalism as the University of Lincoln.

As the author of the dystopian novel, Nineteen Eighty-Four, Orwell tends to be associated with gloom, failure and the horrors of living in a Big Brother society.

Yet he had a remarkably bright and witty side.

It stressed the rewards of teaching Orwell to students of journalism, cultural studies – and the humanities in general.

Full text of presentation can be read here.

‘Orwell’s Women.’  Professor Jean Seaton is Professor of Media History at the University of Westminster and the Official Historian of the BBC.

She is the Director of the Orwell Prize and on the editorial board of Political Quarterly.

There is a disconnect between the women that were close to Orwell and part of his milieu and the rather inadequate and stereotypical female characters in the novels.

He knew a rather advanced group of women who were professional, independent, and educated.

Eileen, his first wife, was a trained psychologist, and worked in the Ministry of Food.

Her sister in law was a doctor. Lydia Jackson, a friend of Eileen and Orwell’s, was a pioneering child psychologist and writer of both memoires and novels.

These women were exceptional even in the 1930s and 40s.

Yet they were also marginal (or marginalised).

Eileen in particular existed until recently as others saw her – and with just a few letters in her own words a different, wittier, more forceful character emerges.

What does their experience reveal about women and class in fiction then?

Orwell himself, labouring to become a better writer, often wrote uncomfortably about women.

Or was he just a chap of his time?

‘Orwell and America.’ Professor John Newsinger is Professor of Modern History in the School of Humanities and Cultural Industries at Bath Spa University.

Did Orwell ignore the United States?

Was he so focused on England, Europe, Burma and the Soviet Union that he turned his back altogether on the country that in his lifetime was to become the most important in the world?

The cover of ‘George Orwell Now!’ a volume of essays about Orwell published in 2015 by Peter Lang and edited by Richard Keeble.

The answer is no.

Orwell wrote his most important wartime journalism for the US magazine Partisan Review.

He wrote about American literature, most notably about Jack London.

He was very concerned about the US influence on Britain, both political and cultural.

Towards the end of his life, he made clear that he regarded the Labour government’s subservience to the United States as an obstacle to progress towards socialism and at the same time proclaimed that in the event of a war between the Soviet Union and the United States, he would support the United States.

How did he come to these conclusions?

‘Only Donkeys survive tyranny and dictatorship.’ Professor Tim Crook is Head of Radio and Media Law and Ethics at Goldsmiths.

Is Benjamin the donkey in ‘Animal Farm’ the autobiographical voice of Orwell in his famous satirical animal allegory on failure of revolution, and the development of the totalitarian world?

Benjamin could be regarded as the most intelligent of the animals.

He was certainly an equal of the pigs.

He is all-knowing and cynical.

While it can be argued that his selfishness means the development of pig power goes unchecked, it cannot be said he did not play a brave and energetic part in the Battle of the Cowshed to expel Jones from his farm.

Nor can it be said he did not rouse himself to direct action to try and save his friend Boxer from the Knacker’s Yard.

But while the witty all-knowing cynicism of Benjamin could represent Orwell’s personal bitter-sweet experience of the abuse of political power, Orwell cannot be dismissed as an apolitical bystander who intervened and protested too late.

Indeed, Benjamin says in the novel no one has ever seen a dead donkey;   and yes, donkeys do live a long time.

Is it important to understand why?

The potential in Benjamin’s characterization could unlock a powerful dimension of narrative point of view and ethical ambiguity in any future dramatization of the novel.