John in and out of the Cage

Imagine that you’re among the audience to a classical concert.

You are to experience a composition and expect the musicians to start playing.

Instead you sit there for four minutes and thirty-three seconds.

The time which the piece lasts.

It’s odd, could be perceived as a display of silence but it is highly deliberate.

Instead of paying attention to the music you start noticing the presence of the sounds of the environment and the sounds you, your co-audience and the musicians create.

You’re listening to the sounds that appear naturally.

This was the exact thought behind the piece “4’33” from 1952 by the American composer, music theorist, writer and sound-magician John Cage.

He was born in 1912 died in 1992 and is considered one of the most influential composers of the 20th century.

The piece  is here performed by pianist William Marx:

John Cage revolutionised the way we think about sounds, compositions and writing, by experimenting with instruments and introducing chance and randomness as an element in his work.

He challenged what we traditionally consider as musical and non-musical sources and has inspired a vast amount of musicians, composers, sound artists and writers.

At Chalton Gallery in London an exhibition inspired by John Cage was taking place on the 23th-24th of January.

Freelance curator Christina Ramos was the curator of the exhibition together with Helena Lugo.

We met in her London home in Camberwell, to talk about John Cage’s ideas about  music and sound and how that influenced the exhibition and the art-pieces displayed and performed there.

As Christina Ramos mentions the prepared piano was one of the ways John Cage influenced the conception of composing and listening.

By placing objects on and between the strings or hammers the sound alters and widens the possibilities of sounds and tones played on the instrument.

One of his most popular achievements is Sonatas and Interludes (1946-48), that consists of twenty pieces played on a prepared piano.

One of the artists that has been very inspired by the prepared piano is the German pianist and composer Volker Bertelmann known under the name Hauschka.

Cage’s blurring of the lines between what we perceive as instruments has inspired Hauschka, who performs one of his own pieces here in a video made by Boiler Room.

In the interview, Christina Ramos explains how the elements of change and randomness affects the audience, when they aren’t given any clear directions in how to perceive the particular art pieces.

The way Cage implemented daily objects as instruments into his pieces received rather different reactions, you could say it created a Marmite-effect.

It was objects such as kettles, radios, books, bathtubs and even cactuses and one of his well known performances was ‘Water Walk’ where these particular elements play an essential role.

At the exhibition at Chalton Gallery different objects hang from the ceiling for people to create sounds with, randomly, in the spirit of John Cage.

Objects to create sounds with 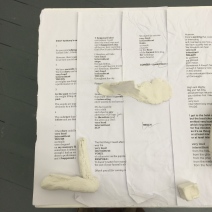 Objects to create sounds with