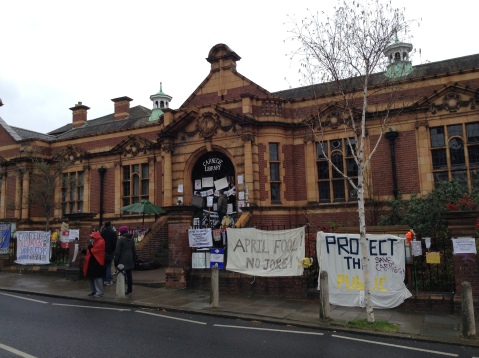 Protestors have occupied Carnegie Library in South London in a bid to protect it from council closure.

The site is scheduled to be closed before reopening in 2017 as a hybrid part library part private gym.

Residents argue the reduction in space and lack of librarians will severely reduce its function.

The group, composed of a diverse mix of residents of all ages, has now been occupying the library for over a week with help from supporters providing food and other supplies.

Already more than 220 writers and illustrators including Nick Hornby, Neil Gaiman and Colm Tóibín have signed a letter of support condemning the council proposals.

Lambeth Council have continued to support the proposed changes claiming the original library resources will still be preserved:

A march in support of the occupiers is expected to take place on Saturday 9th April from the library to Brixton.

Reporting from the scene LMMNews spoke to some of those involved in the occupation.