Anthony Joshua is heavyweight champion after victory over Charles Martin 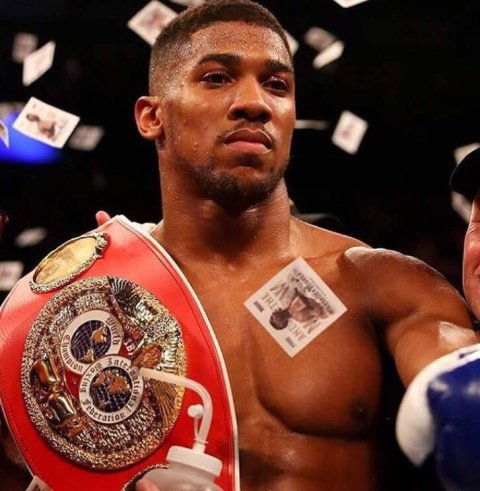 Anthony Joshua is the new heavyweight champion of the world after a second round win against American boxer Charles Martin.

The referee called the fight to a halt after two right hooks in the second round knocked Martin to the floor.

This is only his 16th professional fight- the fifth fastest ascend to world heavyweight status.

Charles Martin had won the title in January and was making his first defence.

The American entered the ring wearing a crown and a velvet cape, to the delight and ridicule of social media.

You knew it was going wrong for Charles Martin when he showed up with crown from Poundland... #JoshuaMartin https://t.co/GWZetvwmYk

Especially when Martin ended up being dethroned just 4 minutes, 32 seconds into the fight.

It took Joshua most of the first round to find his range and throw some right-handed punches that appeared to worry the champion.

Early in the second round, Joshua staggered Martin with left-right punches in quick succession.

After he got back to his feet another massive right handed punch sent Martin to ground and sent Joshua into the history books.

Referee Jean-Pierre Van Imschoot counting Charles Martin after he was knocked to the canvas.

The victory was rather straightforward and Joshua’s smile after the second flooring punch appeared to say that he thought much the same.

That punch came just 1 minute and 32 seconds into the second round.

Many fans thought it was an easy victory.

In his victorious post-match speech, Joshua was clear on his fighting ethic.

I come to knock people out and give value for money.

It’s about power and precision. I told you what I was going to do. I’m going to keep on grinding, keep on working hard, and I’ll fight them all.

He later called the match ‘an unforgettable night’ on Twitter.

Charles Martin admitted he could not cope with the speed of Anthony Joshua after losing his IBF title.

I got hit with a right hand I didn’t see and that cost the fight. I was okay but [the referee] came over at six. I got to my knee at seven, took a deep breath and then when I stood up…

He’s a great fighter but it was just that his right hand was fast. I didn’t see the shot. He had good speed. I’d take it right to him, don’t give him any respect. That’s the only thing I see.

Could a British showdown be next on the cards?

Anthony Joshua said after the match he wants to fight more top ten boxers, and that he will fight Tyson Fury ‘sooner or later’.

Manchester boxer Tyson Fury was stripped of the IBF belt when he opted for a rematch with Wladimir Klitschko rather than a defence, which is mandatory.

If Fury beats Klitschko on July 9th, a firey all-British match up is inevitable.

Fury did not think much of Anthony Joshua’s performance.

So AJ gets a belt, looked slow ponderous, & still looked like a bodybuilder, let me slay the lamb