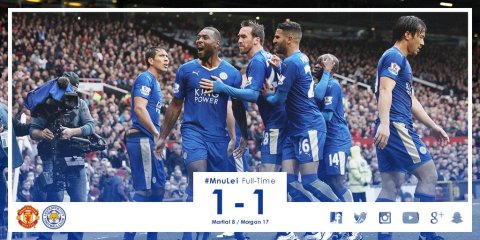 It would have been the ultimate football fairytale, but Leicester City missed the opportunity to secure their first Premier League title win this afternoon.

PICTURED: #lcfc boss Claudio Ranieri looks to give his side encouragement as we enter the last 10 minutes. #MnuLei https://t.co/hvmTJdpdyr

After narrowly surviving relegation last year, Leicester’s odds to win the Premier League back in August were 5000-1.

But Ranieri hadn’t worked in English football for over a decade and was considered a major gamble by Leicester’s owners at the time.

A gamble which has seen the Blues rise to the top of the table and proven to the English football elite that anything is possible.

Souness on #LCFC: "They deserve all the credit you can give them, because none of us saw this happening" snpy.tv/1r9F76Z

But Leicester’s incredible season could still have a very happy ending, as they remain number one in the league with two points in two games needed to claim the championship.

Vardy was serving a two-match ban after his agressive behaviour during Leicester’s match against West Ham.

The Blues got off to a nervous start, which was compounded in the eighth minute by Anthony Martial’s goal from  Antonio Valencia’s cross.

Drinkwater received a yellow card for dragging back Memphis Depay, and a second followed to make a red leaving just ten Leicester players on the pitch for the rest of the second half.

RED CARD! Danny Drinkwater receives a second yellow. Should it have been a pen? SS1 now skysports.tv/mYFIHQ https://t.co/DtbJ0evOgt

Drinkwater will now be out for next week’s game against Everton.

"We're disappointed not to win," Rooney tells #MUTV. "We played some good stuff and I felt we were the better team." https://t.co/8lcvMZ4VXd