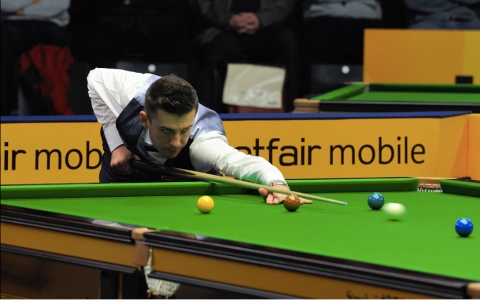 Ding kept in touch with the 2014 winner but could never make up enough ground after world number one Selby opened up a 6-2 lead in the first session on Sunday.

China’s first finalist in snooker’s premier tournament fought his way back to 10-9 and 11-10 during Monday afternoon, but he couldn’t quite pull level.

Ding Junhui won three frames in a row to put pressure on Selby, but the ‘Jester from Leicester’ was unshakable. Image: Wikimedia creative commons licence.

Selby led from start to finish at the Crucible, in Sheffield.

He clinched the win with an uncontested 74 break.

He collected the biggest ever snooker prize of £330,000 to go with the silverware.

His first act after being handed the trophy by Steve Davis was to wave a Leicester City flag.

What an amazing night for Mark Selby and @LCFC – see him lift their flag as he celebrates his world title!https://t.co/c4etUQQ0rp

It’s fantastic. I’m just really happy to win. I saved my best performance for the final.

I can’t believe it. I’m not sure what’s more of a shock: me winning it twice, or Leicester ­winning the Premier League.

And speaking of his opponent:

I think he really showed his class tonight. Ding’s an artist, I’m more of a scribbler.