Andy Murray will hold onto his world number two ranking of he can win the tournament. Image: Tatiana from Moscow, Russia, Wikimedia creative commons

He’s beaten the Spaniard in this stage of the competition for the second successive year.

This ends Nadal’s 13 match unbeaten run on clay and gives the Scot a chance to hang on to his number two world ranking – which he’ll do if he can win the competition.

Otherwise Roger Federer is likely to overtake him.

The 28 year old from Dunblane, who saved 11 of 13 break points, said he was ‘going back in the right direction again’ after crashing out early in Indian Wells and Miami in March.

I think it’s big – it’s not easy. Not loads of players have won against Rafa on clay throughout his career.

To beat him in Spain on a clay court is obviously a big challenge. It’s a big step for me from where I was four or five weeks ago.

Murray broke serve to establish a lead in the first set, until the home crowd roared on Nadal who broke back.

But it was the Scot who took the first set with a winning forehand that broke the home favourite for a second time and silenced the crowd in the La Caja Mágica.

The second set was a tale of break points as Murray saved eight of the nine he faced and won his two opportunities, to secure the match and go through to the final.

The Spaniard believed he was ‘unlucky’ in the second set but said that Murray ‘adapted better than me’ to the cool conditions which affected the bounce of the ball.

I played more aggressive, I increased the intensity and rhythm of the game and had more opportunities than him in the second.

Djokovic beats Nishikori to set up meeting with Murray

The Serbian took the only break point on offer in the opening of the first set, before breaking Nishikori’s serve again at 5-3.

Djokovic looked set to sweep the Japanese player aside as he led 5-4 in the second, on serve.

However, a lapse in concentration allowed the tireless Nishikori back into the game which took the set to a tense tie break.

The Serb powered through as  his opposition seemed to run out of steam. 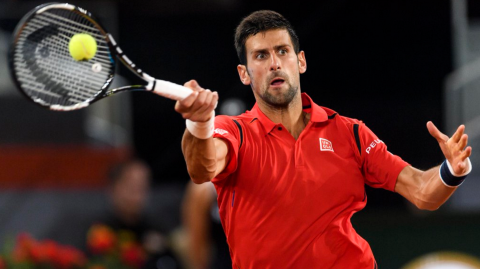 Kei Nishikori battled hard but it was not enough to outdo a solid Djokovic performance.

The crowd clearly appreciated his effort.

On the prospect of only his fourth meeting with Murray on clay, Djokovic told Sky Sports:

Andy has improved tremendously on clay and has proved he is definitely one of the best in the world on this surface.

The rivalry continues and we’ve had so many good finals. I look forward to another one.

The final takes place tomorrow, May 8th, at 5pm GMT.