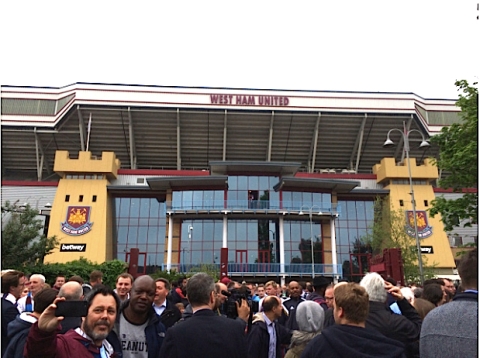 West Ham bid a fond farewell to their home of 112 years, the Boleyn Ground.

Sports Editor Al Riddell was at the Boleyn Ground last night, speaking to fans and soaking up the atmosphere.

The Upton Park fortress has seen its fair share of legends pass through it’s iconic turrets.

On an emotional night in East London, thousands of fans filled Green Street and gathered around the stadium to say farewell, before their move to the Olympic Stadium in Stratford, this summer.

Many took to twitter to pay tribute to the iconic Upton Park ground.

Former players, like goalkeeper Adrián, and captain and local hero Mark Noble, spoke of their fond feelings towards their home ground.

112 years of history!Proud to have been a part in 3 of them! #Farewell #BoleynGround #Hammers ⚒ pic.twitter.com/hO394JXOgd

Some chose to honour the history of the 112 year old ground.

Boleyn Ground, 1944, the remains of the South Bank and West Stand after a German bombing raid #WHU #FarewellBoleyn pic.twitter.com/Wa5rfL4MxJ

More tributes praised it as an iconic sporting arena.

Some chose to remember some of the great moments witnessed at Upton Park:

But was another great moment set to take place on the pitch?

West Ham were to play Manchester United, in a blockbuster of a Premier League match.

There was a lot at stake for both teams.

For West Ham, a win would see them leapfrog Southampton into sixth place, in a good position to secure a European place.

Manchester United had their fate in their own hands knowing two victories – here and at home to Bournemouth on Sunday – would assure Champions League football next season.

Before kick off, the atmosphere outside the ground was intense and the emotion of the night was almost tangible.

The smell of fried food and lager hung in the air; the goodbye party was in full swing.

As the Manchester United team bus arrived, a minority of supporters threw bottles and other missiles in an act that has since been condemned by West Ham and the FA.

West Ham have said they will hand out life bans to those involved in the trouble.

Players from @ManUtd filmed themselves as @whufc_official fans bombarded their coach with bottles and canshttps://t.co/5qj6NwcJhl

It is important to note that those causing damage to the bus were a very small minority of West Ham supporters.

The rest were enjoying a peaceful, convivial occasion in good spirits.

However, the pre-match trouble meant kick off was delayed by 45 minutes.

Fans gather around the Man utd team bus as it attempts to access the Boleyn Ground car park. The road is at a standstill.

When the match finally got underway, the fans were treated to a fittingly dramatic end to their Upton Park residence.

West Ham dominated and should have led by more than Diafra Sakho’s goal at the break.

Antony Martial turned the game on its head and had Manchester United in charge with only 18 minutes remaining, first ending a sweeping move then beating Darren Randolph at his near post to put the visitors ahead.

Not to be outdone on their special night, two towering headers in the space of four minutes from Michail Antonio and Winston Reid gave the hammers the victory they richly deserved.

West Ham manager Slaven bilic said the game was like a movie script.

It ticked all the boxes.

If you wanted to make a movie about this great stadium and about the last game then you would have all the boxes – a great opponent, late game, five goals, a thriller. All the boxes for a blockbuster.

The result leaves West Ham in sixth position with one game still to play in a successful season.

For Man Utd, a misfiring display means their hopes of Champions League qualification is over if rivals Man City can win their final game of the season.

This may have ramifications for Louis van Gaal’s tenure at Old Trafford, as speculation over his future swirls.

The Dutchman did not blame the result on the pre-match trouble, instead focusing on his team’s inability to cope with West Ham’s ariel presence.

First of all you cannot prove that (it had an effect).

I think the disappointment is because we were 2-1 ahead, we changed the match in our favour and in a fantastic way.

Then you lose because of the set-plays and that I have already said before the match, we tried to organise everything but still you miss the centimetres so we have a lot of set-plays and corner goals against us already.

After the match, the Boleyn Ground was waved farewell in spectacular fashion, with fireworks, a lazer display and Hammers heroes from yesteryear arriving onto the pitch in decorated black cabs.

A poignant ceremony brought 112 years of the Boleyn Ground to a close ➡️ https://t.co/LLv8xmxzF9 #FarewellBoleyn pic.twitter.com/GpHnaRBO6E

West Ham TV takes you on an emotional musical journey through the #FarewellBoleyn ceremonyhttps://t.co/fSrMqKIcqY

The lights have gone down for the last time. #FarewellBoleyn you’ll never be forgotten pic.twitter.com/6EiwEqc5qm