Christine Lagarde warns of rising inequality, and other stories

Speaking at the World Economic Forum in Davos, Christine Lagarde has said that she warned of the impact of rising inequality four years ago.

Lagarde, the managing director of the International Monetary Fund, recalled her plenary speech in 2013, in which the rise of populism was a theme.

She ‘did not get much traction’ at the time, and was criticized by leading economists.

Mr. Juncker criticised populist parties for believing that migration problems might be solved by breaking up the EU.

Three earthquakes have struck central Italy today, though no casualties have been reported as yet.

Residents in Rome described their homes shaking when the first quake struck at 10.25 am local time. Rome’s metro was evacuated after the second quake.

Today’s earthquakes, measuring between 5.3 and 5.7 in magnitude, come just months after an earthquake killed 299 people across central Italy in August 2016.

Italy lies along the active Laga Fault, which experts say has been stressed by previous quakes.

Footage from the Independent website show chaotic scenes in Rome. 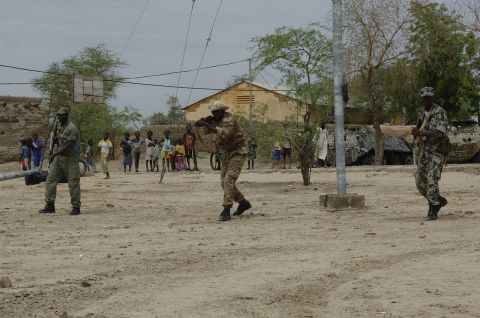 At least 50 people have been killed in a suicide bombing in Gao, northern Mali.

The Guardian quoted a military official who reported that over 50 people had died by 1.30 PM local time (1330 GMT). The death toll is expected to rise.

The camp in Gao was set up as part of a 2015 peace deal two years after a French-led international military interventional was launched in the region.

Displaced Iraqi civilians return to their homes outside Mosul after their village was re-taken by the Iraqi Army from the so-called Islamic State. Image: Anadolu Agency, Getty Images

The largest Iraqi military operation in recent years continues, as a coalition of domestic and US forces battle to re-take Mosul.

The city in the north of the country is the so-called Islamic State’s last urban stronghold in Iraq.

Now, the army are preparing to retake the jihadist-controlled area west of the Tigris river.

The operation began in October, two years after the jihadists overran the city.

More than 100,000 people have fled their homes in the meantime as a consequence of the campaign.