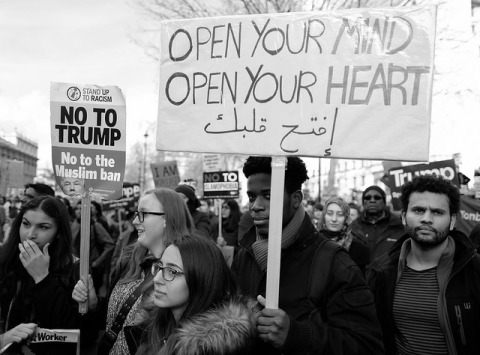 An emergency demonstration took place on Monday after news of President Donald Trump taking a visit to the United Kingdom just after his muslim ban announcement.

Some of the people this affects includes serving members of the army and Briton dual-citizens like Olympic champion Mo Farah.

May has decided to not speak out about Trump’s muslim ban and has formed allies with the president.

PM: It is in the interests of Britain and America to stand strong together to defend our values, interests and the ideas in which we believe pic.twitter.com/i0qc67wymP

Yesterday the PM met @POTUS at the White House where they discussed the US and UK’s special relationship. Read more: https://t.co/cX3guzERrW pic.twitter.com/pSoxoLgs62

May has also announced later this year Trump would take a visit to the U.K.

Because of the muslim ban and state visit an event was made via Facebook for an emergency demonstration.

Another speaker was activist Bianca Jagger who spoke to London Multimedia News on the day.

It has been said that around 10,000 people gathered outside Downing Street.

Emergency Demo 1 from Londonmultimedianews on Vimeo.

Emergency Demo 2 from Londonmultimedianews on Vimeo.

Demonstrations also took place across Britain, including Cardiff and Edinburgh.