Unity Protest March: Activists gather in Croydon in support of refugees, in wake of attack on teenage asylum seeker. 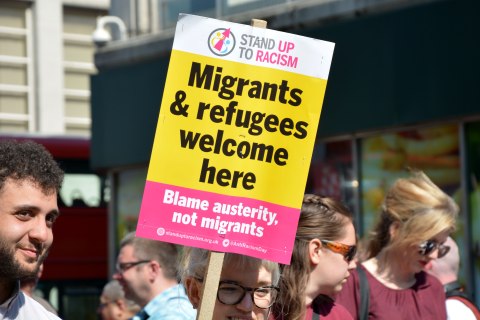 ‘Say it loud, say it clear! Refugees are welcome here!’

This chant rang out in the streets of Croydon as over a hundred protesters joined forces for the Unity Protest March.

The unity protest was called by Stand Up to Racism and was supported by various local campaign groups and trade union branches including; Croydon Assembly, Croydon Trades Council, Croydon Momentum, Croydon Disabled People Against Cuts (DPAC) and Croydon NUT.

These groups united in taking a stand as a show of solidarity with refugees, in wake of the assault on 17-year-old Kurdish-Iranian asylum seeker, Reker Ahmed.

The attack, which police are treating as a hate crime, took place in Croydon close to midnight on Friday 31st March.

Whilst waiting at a bus stop with two friends, Mr Ahmed was approached by a group of people demanding to know where he was from and, on learning he was seeking asylum, chased and assaulted him.

The ‘brutal attack’ left the victim with a fractured spine, a fractured eye socket and bleed on the brain.

He is now recovering and in a stable if still serious condition.

Police have said between 20 and 30 people were involved in the assault of which London Mayor, Sadiq Khan, has said has no place in ‘London, Britain or anywhere else’.

Hate crime has no place in London, Britain or anywhere else. The perpetrators of Friday’s attack in Croydon will be brought to justice. pic.twitter.com/qxNa0KiCSQ

Police are still searching for five males in connection with the attack and highlighted the possibility that this number may raise during their ongoing enquires.

At midday on Saturday (8th April) the protesters began to congregate at the top of North End in Croydon, their numbers steadily grew into a menagerie of brightly coloured placards and signs.

Speeches from representatives of the various organising bodies were made to an enthusiastic crowd.

Weymann Bennett, the national co-convener of Stand Up to Racism, called for unity and acceptance saying, ‘whatever your religion, gender or race you’re welcome in Croydon’.

His sentiments were echoed by many of the speakers including, Paula Peters of the DPAC and Lorraine Hunte of the Croydon NUT.

The course of the march took the protestors down the high street before congregating in Exchange Square.

Not everyone in Croydon welcomed the protestors and there were several outbursts of abuse from some passers-by.

The event passed peacefully in the main with the only moment of tension occurring when the police attempted to stop the march going onto the road.

On arriving at Exchange Square messages of support were read out from Bishop of Croydon Jonathan Clark who was unable to attend in person.

His statement said the attack had ‘no place anywhere, and certainly no place in Croydon’.

Rekar Ahmed’s friend, Dilshad Mohammed, who was with him on the night of the attack and was also injured, joined the protesters as further speeches were made.

Dilshad Mohammed, one of the 3 victims of attack and friends with Rekar, has attended the march in Croydon pic.twitter.com/YHEpkzm4Te

Zinar Demeni, from the Kurdistan Solidarity Campaign, spoke of going to visit Mr Ahmed in hospital.

He was quite shocked when we first arrived at his bedside. He didn’t know what was going on. You could clearly see the bruises on his eyes. He couldn’t even open his left eye. When he made an attempt to stand up you could see on his face the agony as the results of the injuries.

A Met Police spokesman has released a statement encouraging any further witnesses who haven’t yet contacted the police to do so.

It is important that we understand the full circumstances which led to the incident on Friday March 31 and would continue to encourage those that do have information who have yet to speak to us to come forward and do so.