At least twelve people have been killed in the Grenfell Tower block fire disaster in West London.

The Mayor for London, Sadiq Khan, says the number of fatalities is likely to rise.

Multiple sources are warning that the potential death toll could represent one of the worst civilian disasters in recent history.

The London Ambulance Service says 68 people have been taken to six different hospitals after fire engulfed Grenfell Tower on the Lancaster West Estate in London.

The 24 storey building housed around 600 people.

The fire spread rapidly with only one stair-case escape route.

Many people living in Grenfell Tower in Latimer Road, White City are said to be unaccounted for.

Public agencies and Londoners are rallying to help survivors who have lost all their belongings and only escaped with their lives in their night clothes.

The scale of the disaster is attracting international media coverage.

There have been dramatic and upsetting accounts of people being trapped in the building and escaping the smoke, debris and fire that broke out in the early hours of this morning.

#GrenfellTower Fire: I woke up to people screaming ‘don’t jump’

A Grenfell resident describes the scene

A cordon is in place around the building & approx 30 adjacent flats have been evacuated by police #NorthKensington https://t.co/QYF9V38wWJ pic.twitter.com/ugvDFswb7w

Over 200 firefighters, 45 fire appliances, and twenty ambulances have been sent to the major incident.

More than 100 medics are attending.

Firefighters entered the burning building wearing breathing apparatus in a desperate attempt to rescue trapped residents and tackle the rapidly spreading blaze that appears to have spread throughout the tower block.

This is an unprecedented situation, with a major fire that has affected all floors of this 24 storey building, from the second floor up. In my 29 years with London Fire Brigade I have never seen a fire of this nature.

Over 200 firefighters and officers are attending this incident, with 40 fire engines and a range of other specialist vehicles, including 14 fire rescue units at the scene.

Based on the level of resource that was needed at this fire we declared it a major incident in the early hours of this morning.

London Fire Brigade’s Control room took multiple calls, with the first being received at 00.54am The first fire crews arrived on the scene in under six minutes and were faced with a rapidly developing and incredibly complex  fire.

Crews wearing breathing apparatus have been working tirelessly in extremely difficult conditions to rescue people and to bring this major fire under control.

London Ambulance Service have confirmed 64 people have been taken to six hospitals.

I am sad to confirm that we now know that there have been fatalities. I cannot confirm the number at this time and as you will appreciate with a fire of this size, affecting such a large building it would be unhelpful of me to speculate further but our thoughts are with all those who have been affected by this terrible incident.

#UPDATE At least 6 killed when fire tore through London apartment block with reports of people leaping from building https://t.co/sv14n0quQM pic.twitter.com/HsEIV5iP7S

The cause of the fire is not known at this stage and clearly we will be here all day and will be providing further updates, working with the Metropolitan Police and London Ambulance Service.

There will be an investigation but at this stage I do not want to speculate about the cause of the fire or what has caused it to spread in the way that it did. We will be working with all agencies, including the local authority to support all of those affected by this incident.

An eyewitness describes watching a baby get ‘dropped from ninth or tenth floor’ of Grenfell Tower pic.twitter.com/0B4mZ7K81v

I would also urge anyone who has been involved in the fire and is safe to make themselves known to the emergency services if they haven’t already done so. 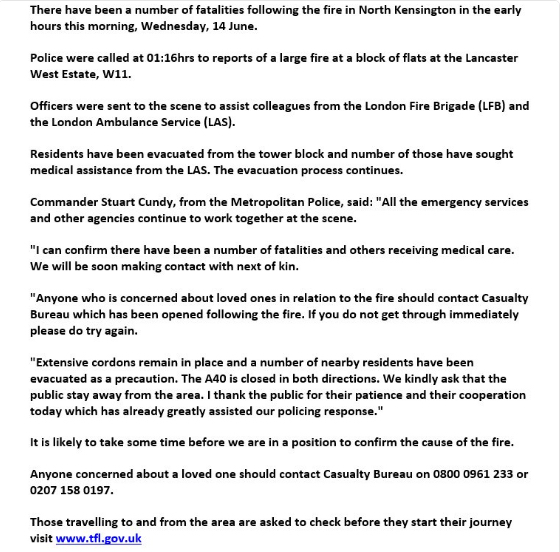 The raging fire and huge plumes of black and grey smoke could be and can still be seen for miles around.

“So heartbreaking. We can still see residents coming to their windows.”

Updated statement on #GrenfellTower. We have treated & taken 68 patients to 6 hospitals. 18 are in critical care https://t.co/5IZS0JeRW3 pic.twitter.com/9JkmxS2zaM

More than 100 medics are responding to #GrenfellTower#NorthKensington & we have taken over 50 patients to hospital https://t.co/5IZS0JeRW3pic.twitter.com/unp2KmwS1i

This is the scene from Freston Road, around 150 metres from the Grenfell Tower pic.twitter.com/b6ZSlJDbyf

“She had to step over a dead body”
Richarn’s mum had to be rescued from #GrenfellTower. He describes an agonising wait to hear she was safe. pic.twitter.com/280XzAqTGu

This man has lost everything in the London fire. He was on 7th floor & says he’s lucky to be alive https://t.co/mcezh9S5b7 #GrenfellTower pic.twitter.com/wM2mZZckru

Here is everything we know about the Grenfell Tower fire so far pic.twitter.com/PXcTJ4Wqs7

.@jeremycorbyn speaking after the #GrenfellTower fire: “if you cut local authority expenditure then a price is paid somewhere”. pic.twitter.com/bDeA94j5LK

London Mayor Sadiq Khan says many people will have questions that will need to be answered after #GrenfellTower fire https://t.co/CLEIhCCOYn pic.twitter.com/wwD8mlJoch

This is how the Grenfell Tower disaster first broke on emergency service social media in the early hours of this morning: