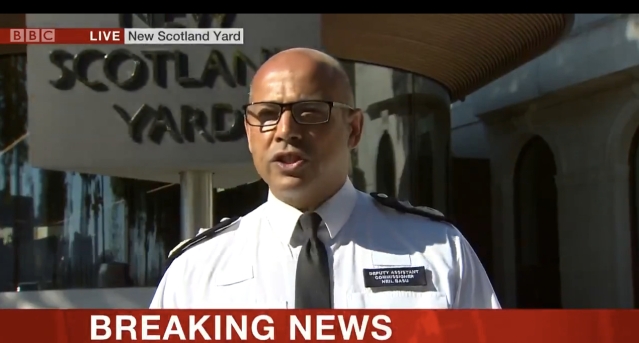 Police, fire and ambulance crews have been called to Seven Sisters Road in Finsbury Park after a van ploughed into worshippers leaving a mosque after midnight.

The person who died was receiving treatment after collapsing in the street when the attack took place.

Eight people have been taken to hospital for treatment; some with critical injuries.

Two other people were injured and treated at the scene.

The Prime Minister, Theresa May, said it was a sickening attempt to divide people.

She praised the bravery and restraint of the Muslim worshippers who detained the suspect.

…there has been far too much tolerance of extremism in our country over many years – and that means extremism of any kind, including Islamophobia.

“Hatred and evil of this kind will never succeed” – Theresa May responds to #FinsburyPark attack https://t.co/3A5ouLb4Ph pic.twitter.com/LH6iJUZD8P

People are “frightened something like this could happen again” – Labour leader Jeremy Corbyn on #FinsburyPark attack https://t.co/4RekPXmyl4 pic.twitter.com/XMNHgSvwZH

Many had been attending for the Islamic holy month of Ramadan.

A man has died after “potential terrorist attack” in #FinsburyPark, north London. 48-year-old man has been arrested https://t.co/iuoVrvSunw pic.twitter.com/UlPnZcahef

He was saying “I want to kill muslims” – Abdul tackled the #FinsburyPark attacker to the groundhttps://t.co/nAd8sqpOI3 pic.twitter.com/2ZugbP1vyP

“This was an attack on London and all Londoners,” police say after one man died in #FinsburyPark attackhttps://t.co/er48R7bIEu pic.twitter.com/0cQQiJWOta

These people witnessed the #FinsburyPark attack when a man drove a van into worshippers near a north London mosquehttps://t.co/175cGU4fU0 pic.twitter.com/s0yR595Vqg

This is how the incident has been reported by emergency services and media during the early hours of the morning.

Police are on the scene and are dealing with a major incident in Seven Sisters Road https://t.co/eYPjbVvlZGpic.twitter.com/BzVdQUNfw8

Police are treating it as a potential terrorist attack, and a 48-year-old man has been arrested at the scene, after being detained by members of the public.

Several eyewitnesses, including those who detained the suspect, described the suspect shouting ‘kill all Muslims’ and telling the members of the public to ‘kill me.’

Footage shows moment the suspect in the #FinsburyPark attack was arrested by police https://t.co/gQs1QKCY9w pic.twitter.com/BQMLjf4q4F

The attack has taken place in the constituency of Labour Party Leader Jeremy Corbyn who has released the following statement:

I am shocked by this horrific and cruel attack in Finsbury Park, which is being treated as an act of terror.

As the local MP, I have met with Muslim community leaders at the Muslim Welfare House alongside Islington council leader Richard Watts, the council’s chief executive Lesley Seary and the Metropolitan police.

Richard and I will attend prayers at Finsbury Park mosque later today.

I appeal for people and the media to remain calm and respectful of those affected.

In the meantime, I call on everyone to stand together against those who seek to divide us.

“People were shouting and screaming ‘a van’s hit people’.”

We have taken 8 patients to hospital following the incident on #SevenSisters Road in #FinsburyPark https://t.co/oL75V7ZUWD pic.twitter.com/KQNcFumxIC

Witness Abdikadar Warfa told @PA people tending to a man who had collapsed were struck by a van #FinsburyPark pic.twitter.com/k51KRBkNKx

Mohin said his cousin was caught up in #finsburypark – he escaped with a graze after getting out the way of the vehicle, Mohin said pic.twitter.com/lAHKwDuKcZ

Sadiq Khan, the Mayor of London

Thoughts & prayers with all those affected by the horrific terrorist attack on innocent people in #FinsburyPark. https://t.co/mbBCS9Gaad pic.twitter.com/Fvhl3DOAV4