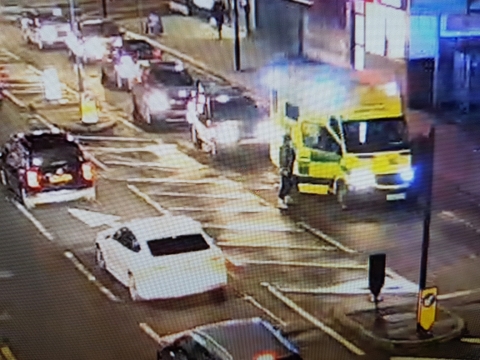 The scene of the incident. image: Met Police

Police are appealing for information and witnesses after a man drove dangerously, and abused a member of London Ambulance Service crew as they were responding to an emergency call in Sutton.

The Met Police say the ambulance unit was on its way to an elderly woman suffering from an acute illness at 6.45 pm on Wednesday 27th December last year.

The driver got out of a Honda CRV-type car, approached the driver’s side door, and allegedly shouted abuse at the man and woman crew.

It is completely unacceptable for our staff to suffer verbal abuse from members of the public when they are trying to do their job. Thankfully, on this occasion, our crew was not injured, but as a Service, we will not tolerate this type of behaviour.

It’s understood that the alleged assault may be connected to an earlier incident when the driver did  not move out of the way of the ambulance as it was being driven with lights and sirens in Worcester Park High Street.

It’s alleged the Honda was driven slowly in an apparent attempt to further delay the ambulance.

The police would like to speak to the driver of the car.

He’s described as white, aged between 40 and 50 and around 5ft 6ins in height.

He may have been wearing a green jacket with dark trousers and white trainers.

Officers will be working to trace higher quality CCTV from buses and information from Automatic Number Plate Recognition (ANPR) systems in order to identify the suspect and the car.

I would urge the man responsible to come forward and speak to police. This is a shocking incident where a member of the emergency services was unjustly abused while on shift, and I would like to think this man will come forward and take responsibility for his actions.

Anyone with information should call Sutton police on 101.