There have been protests in Southwark, South East London against Bangladesh Prime Minister Sheikh Hasina who is visiting the UK.

The premier arrived in London today to join the 25th Commonwealth conference, invited by her British counterpart Theresa May.

However, members of the Bangladesh Nationalist Party (BNP) organised a protest against her appearance in Southwark today.

Incumbent since 2009, the leader of the Bangladesh Awami League has come under scrutiny from both domestic and international critics.

Her government has been accused of fostering a culture of impunity by failing to act after a series of brutal murders of secular writers, bloggers and liberal intellectuals by radical Islamists.

Banners at the protest demanded freedom for the former Prime Minister of Bangladesh Khaleda Zia, who they hail as the ‘mother of democracy’.

Khaleda Zia was sentenced to prison in February of this year in a corruption case for embezzlement of international funds.

The BNP say that the verdict is politically biased, as she has been Sheikh Hasina’s main political rival for almost two decades. 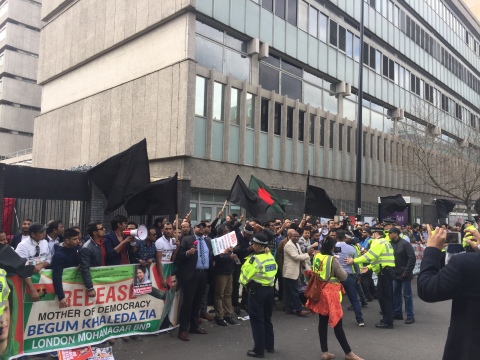 TIME Magazine have included Sheikh Hasina in their ‘TIME 100’ list of most influential people in the world for 2o18:

Within TIME’s profile for the annual list,  her efforts in the Rohingya refugee crisis are praised.

However, the piece goes on to note that ‘Hasina is stumbling badly on human rights’ and that she ‘needs to curb this tendency toward authoritarianism’.