While it is well known that printed newspapers are in fierce competition with online publication and multimedia, the threat to independent local newspapers is far more severe and often overlooked.

Local independent newspapers are a vital lifeline to communities.

They enable healthy debate and inform residents of political, social and environmental activity in the local area.

It is in essence where news begins, even perhaps before the interest of national media.

Yet, in so many areas across the UK, local newspapers are poorly funded, in decline and their existence threatened by overwhelming costs of defending potential legal action taken against them.

In contrast to the well funded national and international media, local newspapers increasingly cannot afford to fight for their communities on important issues.

In their place, sometimes a sponsored or – local government funded – newspaper is printed, often representing itself as impartial local news.

The Chartered Institute of Journalists has consistently campaigned against the legality of such publications.

Vice President Tim Crook said: ‘Unfortunately they can give the impression of being independent local newspapers. This is a dubious practice and the Institute believes it undermines the democratic equilibrium of local newspapers holding government bodies to account.’

He added: ‘This is why we call them “Pravdas”. They are no more than local authority propaganda sheets.’

In the North East of London, Waltham Forest News (WFN) is distributed to residents’ letterboxes, free of charge every fortnight.

The newspaper describes itself:

‘Waltham Forest News is our fortnightly newspaper that keeps you up to date with all the latest council and community news.

We deliver the paper to every home and business in the borough. You can read about how the council is working to create a better borough for everyone who lives and works here and stories about your community.’

Yet, the CIoJ believes many residents do not understand, nor does the publication make clear, that Waltham Forest news is a propaganda newspaper, soley in support of local government and the local authority.

The Institute is concerned that WFM:

Janice Shillum, President of the CIoJ makes her concerns about the practice of council newspapers and the importance of local independent papers clear.

The Government found that Waltham Forest News was not adhering to the Local Audit and Accountability Act, 2014 (LAAA 2014) restricting the council to publishing just four times a year.

The local council recently appealed a Government directive aimed to temporarily stop the publication of WFN, defending itself to the ministry of Housing, Communities and Local Government, claiming it should be exempt from the LAAA 2014.

Waltham Forest News justifies the existence and distribution of the newspaper as the best value-for-money means to communicate local planning notices to residents.

At current local newspaper advertising rates, the 4-5 pages needed for local planning advertisements could be purchased for roughly £120,000 a year.

A significant saving of taxpayers money, in a year that council tax prices in Waltham Forest have risen by 5%. 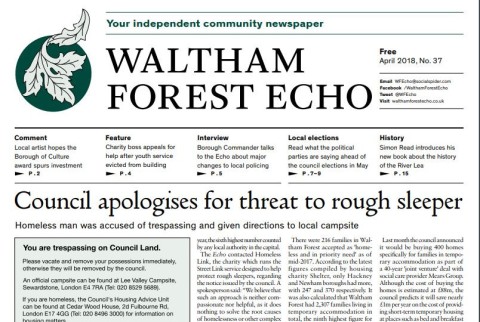 The Echo is a not-for-profit newspaper run by & for the community. If you value local independent media, why not support us by becoming a member? It’s only £5 a month & will really help us to continue providing a local voice for the borough. Sign up here: https://t.co/7ndHENfsCG

Starting an independent newspaper in the current climate is not for the faint-hearted.

In their limited time in print, they have already held the council to account regarding opposed land developments, the rise in knife crime, budget cuts, housing crisis and gentrification.

Another independent newspaper, the Waltham Forest Guardian founded in 1876, is reporting on the illegal activity of Waltham Forest News, indicating that WFN is one of only two newspapers across the country ignoring the LAAA 2014.

Local independent newspapers have the ability to challenge information, to provide an impartial, accurate and balanced view.

They are a community lifeline, representing and informing residents about pertinent issues that may otherwise covertly proceed, without fair debate or representation in the local areas they affect.