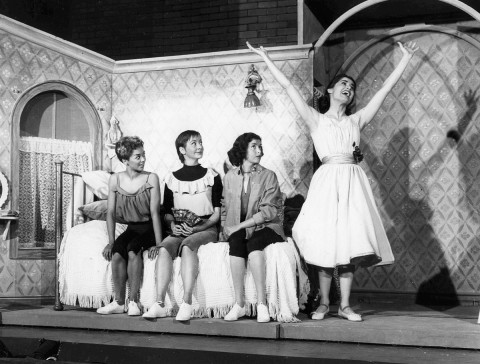 Sierra Boggess has announced that she will be stepping down from the role of Maria in a concert performance of West Side Story after international backlash and accusations of whitewashing.

The performance was meant to be part of the 2018 BBC Proms later this year.

It was scheduled to be included in a celebration of the 100th anniversary of the birth of Leonard Bernstein.

Last week, it was announced that I will be singing in a concert of West Side Story at Royal Albert Hall for the BBC Proms in London. Because it was a concert presentation and not the show proper — I had… https://t.co/NVaMjP7kaL

Boggess issued the above statement online following her announcement. Regarding the alleged whitewashing, she said this:

After much reflection, I’ve realized that if I were to do this concert, it would once again deny Latinas the opportunity to sing this score, as well as deny the IMPORTANCE of seeing themselves represented onstage. And that would be a huge mistake.

Since the announcement of this concert, I have had many conversations about why this is a crucial time, now more than ever, to not perpetuate the miscasting of this show.

I apologize for not coming to this realization sooner and as an artist, I must ask myself how I can best serve the world, and in this case my choice is clearer than ever: to step aside and allow an opportunity to correct a wrong that has been done for years with this show in particular.

I have therefore withdrawn myself from this concern and I look forward to continuing to be a voice for change in our community and our world!’

In this feature, our reporter Gabrielle Watts further analyses the issue.

Lin-Manuel Miranda himself has a direct relationship with West Side Story.

In the year 2000 he was asked to translate some of the musical’s lyrics into Spanish by Stephen Sondheim.

Miranda’s first musical, In The Heights, is also all about Latin American people living in North America.

He’s spoken repeatedly about being frustrated by the continual casting of white actors in Latino roles, or else Latino people having to play ‘stereotypical gang members or servants’.

For Miranda, In The Heights was an opportunity to correct what he saw as the blanket stereotyping of Latinos as criminals in productions like West Side Story.

Miranda believes his frustrations are grounded in a what Latino people experience as an everyday reality.

Only five Latino actors in the Oscars’ 90 year history have won an award, despite Latino people making up nearly a fifth (18%) of the US population.

A University of Southern California study found that only 3% of speaking roles in films in the last decade went to Hispanic people.

Furthermore: Sierra Boggess and Natalie Wood are far from the only instances of white actors being cast in Latin American roles.

Perhaps the most controversial examples in recent history were Ben Affleck in the 2012 Oscar-winning Argo, where he played a character called Antonio Mendez, and Meryl Streep’s portrayal of the Chilean woman Clara de Valle Trueba in the 1993 film, House of Spirits.

As indicated in the feature above, to miscast or ‘whitewash’ Latin American parts, both on stage and the silver screen, raises the concern of ignoring the problem of discrimination towards Latino people, especially in the USA.

This thought was articulated by Pulitzer-prize winning author Junot Díaz, who said this of representation in the arts and media:

In light of this, the fact that Lin-Manuel Miranda specifically employed 22 Latin American artists to perform Almost Like Praying, and that the song itself is a roll call of Puerto Rican towns as well as a direct reference to West Side Story and Hurricane Maria, is an interesting one.

In this context, it seems to be evidence of a deliberate decision to write Latino people back into the international artistic conversation.

Or, in the words of Miranda’s marginally more famous musical Hamilton: ‘I put myself back in the narrative.’