Trump’s disapproval rating at all-time high and other stories

Despite House Speaker Nancy Pelosi’s plea to delay President Trump’s scheduled State of the Union address, the White House is moving forward with plans for him to deliver the speech next week in front of a joint session of Congress.

Ms Pelosi’s request comes as the president’s disapproval rating rises to 57 percent, according to a Politico/Morning Consult survey. Additionally, 54 percent of voters blame Mr Trump and the Republican Party for the ongoing shutdown.

The White House plans to potentially hold an alternative event, including a Trump rally, on January 29.

Mitch McConnell and Chuck Schumer have agreed to hold a senate vote this Thursday on proposals to reopen federal agencies.

May and Corbyn clash over “no-deal” Brexit at today’s PMQs.

Labour leader Jeremy Corbyn requested that Prime Minister May commit to keeping the UK in a customs union, in addition to ruling  out a “no-deal” Brexit.

Mrs May rejected the suggestion, arguing that this would impact the UK negatively, as it would not allow the UK to strike its own trade deals.

On the question of extending Article 50, Mrs May restated her stance on the issue, arguing that this would only postpone a decision.

Why is Theresa May prepared to sell people’s jobs and living standards down the river? #PMQs pic.twitter.com/4BiseqjUbn

Venezuela’s opposition called the population to the streets with the hope of  persuading the nation’s military to force President Nicolás Maduro out of office. 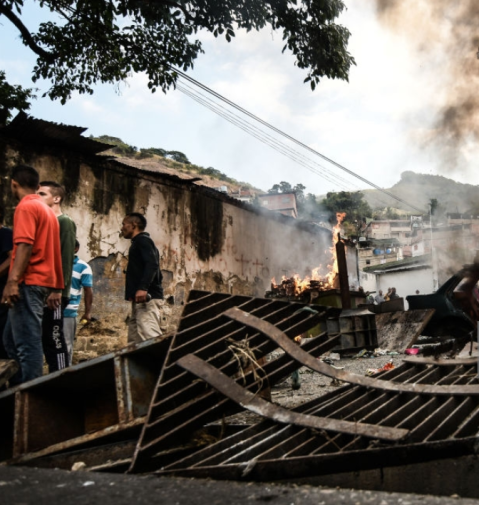 Barricades in the streets of Caracas seen during a protest.
Image: Roman Camacho/SOPA Images/LightRocket via Getty Images

Opposition leaders say that Mr Maduro’s government is in peril as it crumbles under a massive economic crisis.

María Corina Machado, an opposition leader, said: “What we are witnessing is a unique, historic moment we have been preparing for, fighting for, over the past 20 years,”.

Washington claims that Russia violated the 1987 Intermediate-range Nuclear Forces Treaty (INF) which bans either side from stationing missiles in Europe.

Russia’s Deputy Foreign Minister Sergei Ryabkov said that the U.S. hasn’t put forward any data to prove its claim that Russia has tested the missile at a range exceeding the treaty’s limit.

He added: “We were given a clear message that this decision isn’t an invitation to dialogue and is final.”