Speaking on Kingston Green Radio immediately after the Prime Minister used a televised address to the nation to attack MPs who had voted against her Brexit deal, the Liberal Democrats’ home affairs spokesperson expressed bemusement at her ‘shocking’ and ‘bizarre’ performance.

He spoke of a sense of alarm in the corridors of Westminster among MPs opposed to a no deal exit, who were faced with Mrs May ‘holding a gun to their head’.

Theresa May has lost it.

Threatening our country with a “No Deal” Brexit is not leadership.

No change – not listening – blaming everyone else but herself.

Mr Davey, the MP for Kingston and Surbiton, insisted that pitting the terms of any deal against remaining in the EU in a ‘People’s Vote’ was his and his party’s preferred option, although he did acknowledge that revocation of Article 50 was an option after a petition to do so attracted millions of signatures.

He also admitted that in 2016 he had not seen a no deal exit as a realistic prospect – ‘I never thought that the Conservative Party and Mrs May would handle it quite so badly,’ he said.

The former Secretary of State for Energy and Climate Change also declared himself to be more worried about the global climate emergency than he was about Brexit.

While reflecting proudly on his own record in government, having set up the Green Growth Group within the EU, Mr Davey spoke about being ‘deeply troubled’ by the climate crisis, stating that we must do ‘absolutely everything that’s possible as quickly as possible.’

He asserted his belief that the solution was in reforming the financial sector in order to ‘decarbonise capitalism’, advocating a legal obligation for investors to take into account climate risk. 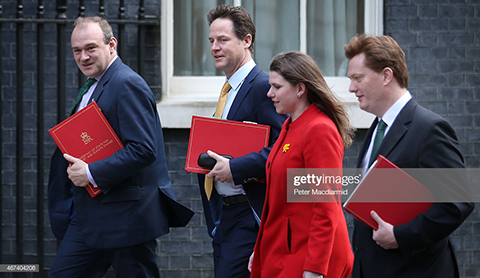 Mr Davey was also asked to reflect on the Liberal Democrats controversial time in coalition with the Conservatives from 2010 to 2015, a record he adamantly defends despite the electoral damage it did to the party.

Citing examples of the positive impact the party had been able to make in government – such as the ‘pupil premium’ initiative that provides schools with financial support for disadvantaged children – he admitted they were less savvy than the Tories in trumping their achievements.

Mr Davey also expressed regret at the way in which the partnership was allowed to be portrayed as one that was cosy: ‘I was arguing with Tories every day, almost like constant war,’ he said.

Listen to the full interview, in which Mr Davey also discusses issues in his local constituency such as problems with the South Western Railway franchise, here: