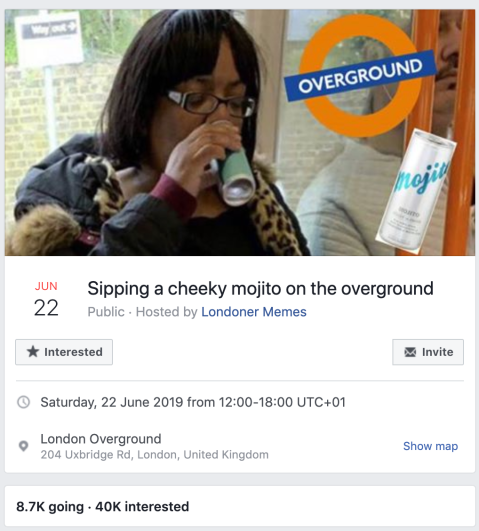 A picture of the Shadow Home Secretary, Diane Abbott, drinking a tin of Marks & Spencer’s pre mixed Mojito on a London Overground train has been featured in the press and circulated online.

Drinking on all of Transport for London’s services, including London Overground, is prohibited, and the Labour MP has since apologised on Twitter.

A photo of me drinking from a can of M&S mojito on the Overground has been circulated. I’m sincerely sorry for drinking on TFL.

This has been met with mixed reaction online, with some disapproving of Diane’s actions, and others, including fellow Labour MP David Lammy, finding the lighter side of the issue.

Sorry for what? Why wasn’t the rum Jamaican. 🇯🇲 https://t.co/aD1ru8N6fB

We spoke to some train users to see how they felt about the situation, and the surprising side effect of this news story.

The story has prompted a lot of people to admit that they didn’t know drinking alcohol on TFL services was against the rules as it is allowed on some train providers.

So while I was at the Brude having a drink the whole Diane Abbott drinking a can of Mojito on the train happened. Why is this a thing? I have never seen a sign saying you can’t drink on the London Overground! I didn’t know you couldn’t. On Transpennine they try and sell you beer

Drinking from or carrying open containers of alcohol on TFL was banned in 2008 by London’s former mayor Boris Johnson in order to improve safety for passengers and, as users of Twitter have highlighted, railway staff.

You guys… 🤣
Personally, I don’t find it a problem when it’s Diane have a sneaky mojito on the Tube.
However, I was a guard on the Northern Line sometime ago and I can honestly say that having to turf drunks off the last train was one of the worst and scariest parts of the job.

Ms Abbott has attracted criticism in the media, including from right wing talkRADIO host Julia Hartley-Brewer who said that ‘if you’re drinking a cocktail on the train at lunchtime… I’m sorry, something’s going horribly wrong in your life’.

Julia Hartley-Brewer, who took to the air to condemn Ms Abbott

This story has brought drinking into the public eye, which reminds us that the issues around alcohol consumption shouldn’t be ignored, as according to charity Drinkaware, there were over 7000 alcohol-specific deaths in the UK in 2017.

Drinking on TFL services was allowed before 2008

It hasn’t all been bad press for the Shadow Home Secretary, though, as many people took to social media to show solidarity by opening a drink on a train, and even planning events on Facebook in support of the MP’s actions.

Solidarity with @HackneyAbbott and all M&S Mojito Socialists of the world. Unite and be merry.#solidaritywithdiane pic.twitter.com/w22GsXFBdJ

An unexpected victory in this whole story seems has been for Marks and Spencer, as there have been numerous reports online of Mojito stock shortages as customers head out to follow this trend started by Ms Abbott, but now are finding it tricky to grab a can themselves.