The poll tax riot 29 years on…

The poll tax riot took place during a protest against a community charge known as the poll tax.

Many saw their taxes rise considerably – to some it was manageable, others unfair.

The tax was accused of saving money for the rich and moving expenses on to the poor. 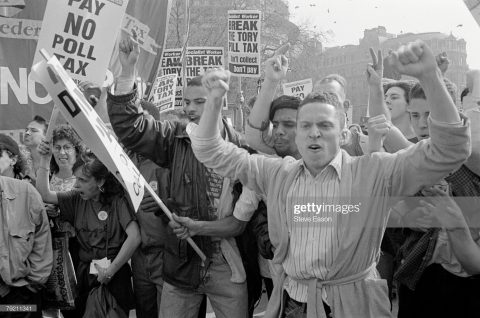 Protestors at a demonstration against the Poll Tax, which later became a riot known as the ‘Battle of Trafalgar’, London, 31st March 1990. (Photo by Steve Eason/Hulton Archive/Getty Images)

Recorded with a specially commissioned score with drummer Diego Torres Cantu, this short immersive piece looks at one persons part in this.

After revisiting a powerful photograph from the day, we follow Lorraine Vivian as she looks back on her part in the Poll Tax riot on March 31st 1990.