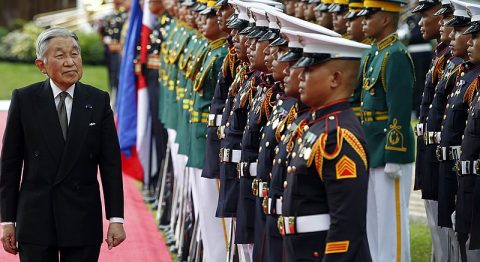 Emperor Akihito during a visit to the Philippines in 2016. Credit: Wikimedia Commons.

The Japanese Emperor Akihito has officially declared his abdication today at the Imperial Palace in Tokyo.

In his closing remarks, he ‘wished Japan and the world peace and prosperity’, and passed over the role to the Crown Prince Naruhito, who will ascend the throne on Wednesday.

The 85-year-old abdicated on health grounds having faced numerous problems over the years, such as surgery for prostate cancer in 2003 and a heart bypass operation in 2012.

Akihito hinted in a speech in 2016 that his age and health problems were impacting on his ability to rule, and that he was likely to step down in the near future.

During his reign Akihito redefined the historic role, becoming an unofficial ambassador for the country and showing compassion to the underprivileged in Japanese society.

Japanese Heisei era ends today with abdication of emperor Akihito. Full of my respect and appreciations to his majesty who always be our side as a symbol of nation.

The NEC faces some division over their stance on Brexit. Credit: The Labour Party

Labour’s National Executive Committee are meeting today to discuss the possibility of backing a second public Brexit referendum, as part of their European elections manifesto.

The Party’s Deputy Leader Tom Watson has put his backing behind the proposal, claiming it could move to ‘heal the divide in the country’.

This stance is not shared throughout the Party.

Many Labour MPs do not support a second referendum.

The meeting comes after party members held prior talks with ministers in an attempt to break Parliament’s Brexit deadlock.

Although the basis of Labour’s proposed referendum has yet to be revealed, a party briefing paper to MPs published earlier in 2019 stressed the need for both a credible Leave and Remain option on the table.

Just a little bit off putting for @tom_watson arriving at Labour NEC….. pic.twitter.com/TvTPdsSgv1

One of many examples of graffiti left behind by Extinction Rebellion’s protest. Credit: Harvey Baldwin.

The group recently held two weeks of protests, causing much disruption around London.

This included road blocks and protests on top of Docklands Light Railway trains.

Demonstrators said their movement is about ensuring a safe environment for the future.

Tory MP Philip Davies has criticised Mr. Gove for agreeing to the talks.

He said the protestors ’cause huge disruption, force the police to make countless arrests, damage the economy and act like hooligans’.

Extinction Rebellion are also due to meet with London Mayor Sadiq Khan later this afternoon.

The tie marks Spurs’ first ever Champions League semi-final, although they did reach the last four of the 1962 European Cup, before losing to Portuguese side Benfica.

Having only picked up one point from their first three group games, Spurs rallied to successive wins over Dutch side PSV Eindhoven and Italian outfit Inter Milan.

They also gained a crucial point away from home against Barcelona, in order to qualify for the knockout stages.

In Ajax they face a confident young side who have knocked out Juventus and Real Madrid in the past two rounds.

Spurs will have to play without both Harry Kane, who is out for the rest of the season with an ankle ligament injury, and Son Heung-min, who is suspended for the first leg.