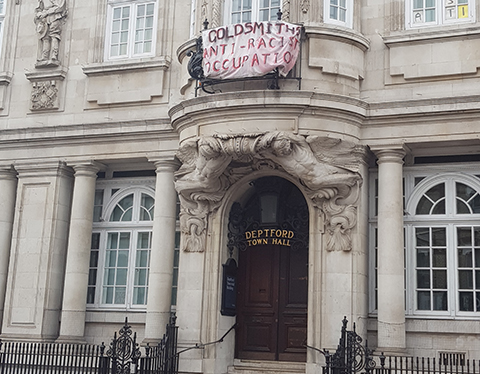 A student occupation of a university building in the southeast London borough of Lewisham has passed its 50th day.

The protesters have occupied Goldsmiths’ Deptford Town Hall on New Cross Road since 12 March, in opposition to what they deem to be a ‘lack of anti-racist action’ by senior management on campus.

#GoldOccupy DAY 50!
That's right, 50 DAYS in occupation! At 3PM we're celebrating & reflecting upon this MASSIVE achievement👊🏿👊🏽👊🏾
We are the longest running POC-, Muslim-led occupation EVER at this university& we will not leave until our demands are met!https://t.co/cJI2CPbtKp

The catalyst for the Goldsmiths Anti-Racist Action campaign was an incident during the university’s Students’ Union elections, in which it is alleged that racist graffiti was daubed on the poster of one candidate.

However the occupiers believe this to be endemic of a wider institutional culture of ‘ironclad coloniality … that subjugates its BAME students, staff, and workers alike’.

In a publicly available ‘occupation manifesto’, the students have outlined a wide range of demands, including a university-wide strategic plan into tackling racism, the removal of statues of ‘colonisers’ and a ‘slave ship’ from Deptford Town Hall, and the inhousing of all outsourced workers such as cleaners and security staff.

Cleaning staff have since been brought in house, but security remain outsourced.

The occupation is in fact just the latest chapter in a complicated history of race relations in the borough of Lewisham, as Jarek Zaba reports:

Goldsmiths, University of London says it has gone out of its way to meet many of the occupying students’ demands and remain available to discuss their continuing concerns at any time. The senior university management have also said:

…these are only steps on a long journey and that Goldsmiths cannot fix deep-seated societal issues alone. Goldsmiths is proud of our diverse and inclusive community, and College management will continue to work with all those committed to ensuring that prejudice has no place on our campus.