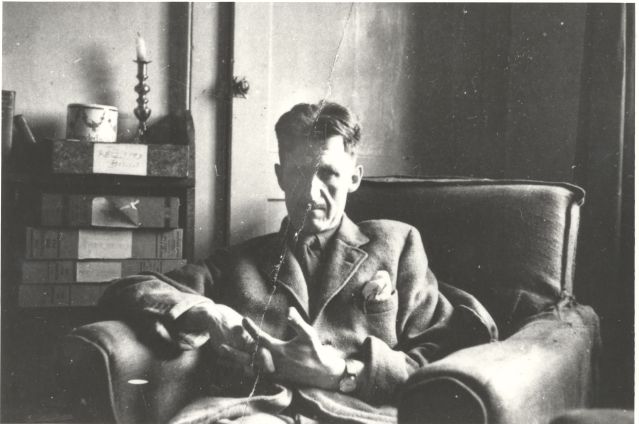 In 1949 a largely bedridden 46 year old writer, coughing blood from tuberculosis, whose father had been an Imperial civil servant being paid to profit from the Opium trade to China, had published a novel that he said ‘was bound to be a failure.’

He wrote to a friend: ‘I ballsed it up rather.’

That novel became one of the most influential books of his century and the next.

The author, George Orwell, died less than a year later.

It’s 70 years since its publication. 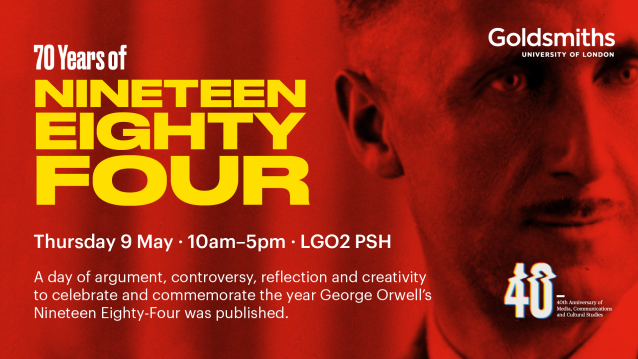 A symposium at Goldsmiths, University of London for May 9th, is going to try and make some sense of this.

George Orwell’s son Richard Blair will reflect on ‘Living with 70 years of my father’s vision of Nineteen Eighty-Four.’

Writer and director Jonathan Holloway will talk about dramatising the novel for radio and theatre.

Professor Richard Keeble will talk on ‘Orwell, Epistemology and the Julia Conundrum.’

The day will be rounded off with a ‘Folk Ballad’- Peter Cordwell’s One Georgie Orwell performed by Tom Powell and Creative Vortex.

The fourth George Orwell Studies symposium is organised in partnership with the Orwell Society which is dedicated to the understanding and appreciation of the life and work of George Orwell.

I’ve often wondered whether Orwell himself would be horrified or laughing uproariously.

Most probably he would be doing both things.

I am not sure it was ever his intention that it should become a handbook for dictators, a manifesto for revolutionaries, something for rock musicians to sing about, with language and concepts that inspired a notorious and lucratively profitable genre of reality television.

It’s always been a bestseller; more so when democracy seems to wobble.

The first publication of Nineteen Eighty Four in Britain in 1949. First Edition covers.

Donald Trump’s elevation to the US presidency and articulation of his own version of Newspeak- ‘alternative facts’ created a new audience for Winston Smith’s disillusioning descent into totalitarian despair and oblivion.

Certainly, Orwell lived long enough to realise that once written and published he lost control of its reception and meaning.

Its ownership and purpose belonged to others- whether the CIA, the Daily Mail or the Communist Party of Great Britain despite the royalties tumbling in.

Orwell had a wicked sense of humour, which I suspect carried much more mischief in matters political.

At Eton he challenged somebody much more junior than him with paper and pencil in hand:

I’m collecting the religions of the new boys. Are you Cyrenaic, Sceptic, Epicurean, Cynic, Neo-platonist, Confucian or Zoroastrian?’
When he was told ‘I’m a Christian’ he replied: ‘Oh, we haven’t had that before.’

I accept that Nineteen Eighty Four is a complex novel but it is also fundamentally unrelenting and exquisite satire.

She had even (an infallible mark of good reputation) been picked out to work in Pornosec, the sub-section of the Fiction Department which turned out cheap pornography for distribution among the proles. It was nicknamed Muck House by the people who worked in it, she remarked. There she had remained for a year, helping to produce booklets in sealed packets with titles like Spanking Stories, or One Night in a Girls’ School, to be bought furtively by proletarian youths who were under the impression that they were buying something illegal.

Orwell’s joke continues does it not when it is revealed that only women were permitted to work in Pornosec because ‘The theory was that men, whose sex instincts were less controllable than those of women, were in greater danger of being corrupted by the filth they handled.’

Orwell, I think, resonates as much with the style of Samuel Beckett and Franz Kafka as of Jack London and Yevgeny Zamyatin.

Beckett’s austere nihilism had a tendency to be taken too literally.

There was always a wry smile and kick of whiskey running through his poetry and dramatic writing.

Kafka would read passages of The Trial to friends and they would be laughing uproariously at their recognition of his ironic satire on life in the Austro-Hungarian Empire.

Nineteen Eighty Four too has subtle shades of ironic light and grey.

When he characterised a moment of intimate tenderness between Winston and Julia with ‘Her head rested on his shoulder, the pleasant smell of her hair conquering the pigeon-dung,’ I wonder if there is the humour and spirit here of his essay ‘Some Thoughts on the Common Toad.’

The art of novelistic prose writing in Nineteen Eighty Four has often been criticised for being over-functional, simplistic and clunky.

Julia frequently gets turned over in the feminist perspective as the problematical projection of the man of his time.

But is there not some ironic depth in her having a comic immunity to the Dystopian ritual of two minutes of hate?

Orwell wrote: ‘She also stirred a sort of envy in him by telling him that during the Two Minutes Hate her great difficulty was to avoid bursting out laughing.’

The comedy of despair sonorously chuckles through Winston’s maxim: ‘Some kinds of failure are better than other kinds, that’s all.’

The earnestness of Winston Smith’s angst about the annihilation of historical truth is countered with Julia’s off-hand deflection: ‘”Who cares?’ she said impatiently. ‘It’s always one bloody war after another, and one knows the news is all lies anyway.”’

Orwell and H.G.Wells
Orwell liked a good argument and rarely held back from provoking those he admired and liked.

That included his boyhood hero H.G. Wells, and threatened what he hilariously described as ‘parricide.’

In 1940, H.G. Wells catalysed what would later become the Universal Declaration of Human Rights with his Penguin Special The Rights of Man: What are we fighting for?

In a way Nineteen Eighty Four would be the imagined Dystopia that The Rights of Man sought to prevent.

First edition copies of ‘The Rights of Man: What are we fighting for?’ by H.G. Wells- the iconic Penguin Special of 1950. (Re-issued by Penguin in 2015)

Yet when H.G. Wells and George Orwell would meet for dinner in August 1941, Orwell had unhelpfully and provocatively castigated Wells for under-estimating Hitler through a reliance on rationalism in politics.

The article’s title alone ‘Wells, Hitler and the World State’ was enough to ensure enduring offence.

Six months later Orwell resumed the attack with a BBC radio talk and accused Wells of looking at the past ‘with the same sort of surprised disgust as a civilised man contemplating a tribe of cannibals.’

The poking here is very funny indeed unless you are H.G Wells with a sense of humour failure.

Orwell wrote in his diary that the great writer sent him an ‘abusive letter’, and addressed him as ‘you shit.’

Wells would later refer to Orwell as the ‘Trotskyist with big feet.’

Nineteen Eighty Four- a novel so much misunderstood?
Orwell’s publisher Fredric Warburg initially decided that Orwell’s Nineteen Eighty-Four manuscript had been amongst ‘the most terrifying books I have ever read’, representing ‘pessimism unrelieved.’

Warburg’s reader’s report has always been, for me, a great source of amusement.

I suspect that the mischief in Orwell’s satirical fun had whipped up his publisher into such a froth of misconception and misinterpretation that he concludes the book ‘smells of death, decay, dirt, diabolism and despair.’

But Orwell, in my opinion, exploited the potential for smell to symbolise oppression and degradation and that there had always been an edge of the olfactory raspberry in his writing. 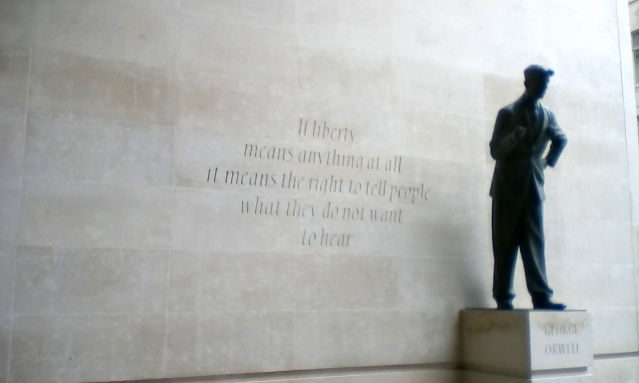 Orwell’s statue outside the BBC with the quotation: ‘If liberty means anything at all, it means the right to tell people what they don’t want to hear.’ Image Tim Crook

I have suspected that the engagement of Winston’s fear of rats was again more burlesque than horror.

How could it not be with the melodramatic lines early on in the novel: “Dearest! You’ve gone quite pale. What’s the matter? Do they make you feel sick?”
“Of all horrors in the world- a rat!”

Orwell’s Nineteen Eighty Four is a masterpiece because the multiple layers of irony in his complex satire bounce around those who are recognising it in his text, and those who are quoting it and engaging with it literally.

Two and two make five, War is Peace, Freedom is Slavery and Ignorance is strength. We know and we recognise and our mirth is the ironic space of thinking resistance and always will be.

The joke in Newspeak
The best of Nineteen Eighty Four is, in my opinion, the very last- the appendix on the principles of newspeak that I fear far too many readers avoid or don’t quite have enough energy to stick with.

Orwell had to resist the banal stupidity of American Book Club editors wanting to dispense with it.

The reason there is true genius in Orwell’s last novel is that there has never been any writer with enough cheek, and creative jest to render the loveliest and most cherished part of the American Declaration of Independence (We hold these truths to be self-evident…) into the single word crimethink.

Whenever I read that penultimate paragraph of Nineteen Eighty Four, I can hear the tubercular and not very well Orwell drawing in a deep puff from one of his toxic rolled up cigarettes.

I can also hear him giving out a contented chuckle and kicking off the slippers from his Trotskyist big feet as one of those final gestures of approval a great writer is entitled to when he completes one of the finest novels ever written in the history of English literature.