No 10: Boris Johnson ‘in good spirits’ even though COVID-19 symptoms persist

The Prime Minister still in hospital though in ‘good spirits’ 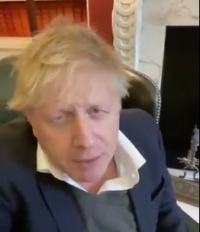 Boris Johnson as seen in his last public address on Friday.

Number Ten says Boris Johnson continues to lead the Government from his hospital bed and is said to be in ‘good spirits’.

His official spokesperson declined to give information about when the PM might be discharged.

Mr Johnson is being treated at St Thomas’ Hospital opposite the Houses of Parliament- a short drive from his home in Downing Street.

It’s been stressed that Mr. Johnson’s hospitalisation was ‘not an emergency admission.’

His Downing Street office said ‘His care will be dictated by the doctors who are looking after him.’

Boris Johnson is in “good spirits” after spending a “comfortable” night in hospital, where he remains under observation, Downing Street has said.

For the latest updates on #coronavirus, click here: https://t.co/wTq32syedG pic.twitter.com/PDyj7sHuKg

Four-person units of police, fire brigade and health service staff have been set up to help cope with suspected Covid-19 deaths in people’s homes.

The teams are being trained in collecting the dead in order to take pressure off hospitals and the London Ambulance Service.

Now, detectives are set to help those teams spot if there are any suspicious circumstances involved in suspected victims of Covid-19 who have died at home.

Projections suggest that about one third of Covid-19 deaths could happen outside hospitals.

Volunteers at the London Fire Brigade (LFB) were told not to underestimate how emotionally demanding this role will be.

What we are asking the officers to do is essentially deal with one fatality, then another and then another. […] So obviously the mental robustness and physical aptitude to be able to do this is why we asked for volunteers, people who felt they were able to do this.

Regius Professor of Medicine at Oxford University, Sir John Bell, has stated that the development of reliable at-home immunity tests will take ‘at least a month.’

The government advisor said that the search for an antibody test that would prove effective was ongoing, but those tested so far had failed.

News today from an academic advising the government on antibody testing makes clear that those hoping for a quick resolution are to be left disappointed, Katy Balls reports https://t.co/MlIF9RLTba

He said: ‘We clearly want to avoid telling people they are immune when they are not.’

While a test that delivers results in 90 minutes has been developed successfully, at-home tests have proven to be more difficult to design.

Long-term protection to this virus comes from antibodies, small proteins produced by your immune system that attack the virus and neutralise it so it cannot be spread and cannot do any more damage to the person infected.