In a private funeral that was broadcast live on Tuesday in Huston, Texas, Floyd’s niece, Brooke Williams, made an impassioned declaration about the injustice done to her uncle.

She referenced his final words when she said: ‘I can breathe and as long as I can breathe justice will be served.’ 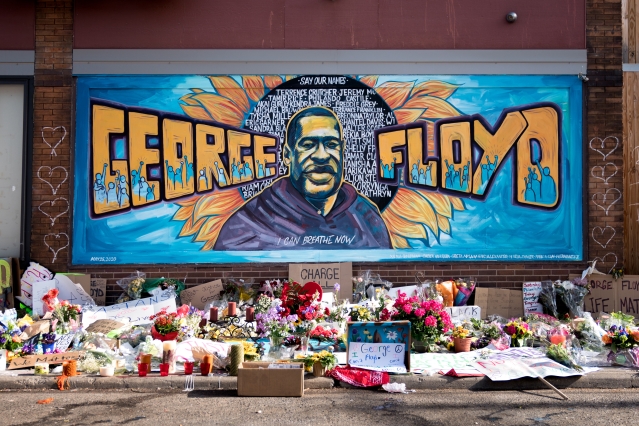 Mural of George Floyd near where he died Image: Lorie Shaull CC BY-SA 2.0

Williams also mentioned the need for the American judicial system to change: ‘Why must this system be corrupt and broken?  These laws need to be changed. No more hate crimes, please.’

She added: ‘Someone said make America great again. When has America ever been great?’

Biden, who meet the family Monday night stated: ‘Now is the time for radical justice.’

George Floyd will be laid to rest in his hometown in Huston alongside his mother’s grave.

Callaghan’s family had increased concerns due to William’s non-verbal autism and the potential inability to communicate with rescue teams.

He was found on Wednesday about 10 minutes off the trail near the peak of the mountain.

He was without shoes and wearing only tracksuit bottoms and a sweatshirt.

Not all heroes wear capes. The brave man Ben Gibbs, has become an inspiration after finding missing autistic teenager William Callaghan in a ‘mountain miracle’ at Mount Disappointment.@JillHennessyMP @TracyBrabinpic.twitter.com/Ovz4akbNK8

Temperatures neared 0c in the past week and  Victoria Police Inspector, Christine Lalor, told reporters that he appeared to be ‘remarkably well for the time he’s been out there.’

William has been taken to hospital for monitoring but has been ‘alert, warm, eating and drinking and he actually asked for McDonald’s,’ adds Lalor.

North Korea stops all communication with the South

Kim Jong Un’s sister, Kim Yo Jon, made the decision to cut all communication with South Korea because of Seoul’s activists sending balloons over the boarder.

North Korea’s State News Agency, KCNA, said that cutting communication with the South was the first step to ‘completely shut down all contact means with South Korea.’

This came after KNCA’s response stating that South Korea ‘connived at the hostile acts… by the riff-raff, while trying to dodge heavy responsibility with nasty excuses.’

KNCA added they would be shutting the military and presidential hotlines and well as the communication at the Korean liaison office. These lines allow the two countries to maintain vital military communications.

North Korea did not answer their daily liaison call with South Korea on Tuesday morning and also went silent on all military hotlines, said a military spokesperson from the South.

At least 59 people have been killed in a suspected jihadist attack in north-eastern Nigeria on Tuesday.

No group has admitted being responsible for the attack that killed dozens in a remote village in the Guibo district of Borno state.

According to local reports the village was destroyed in what is believed to have been a reprisal attack.

The jihadist group Boko Haram, a branch of the Islamist State group, have carried out deadly attacks in the north-east of Nigeria.

Boko Haram caused global outrage when they abducted over 270 schoolgirls in Chibok in Borno state in 2014.

The group is also active in the neighboring countries of Niger, Chad, and Cameroon.

However, it is still unclear who carried out the attack in the Guibo district.

A mural that had been stolen in January 2019 from Bataclan music hall in Paris has been found by police in central Italy.

According to Italian publication, La Repubblica, the painting was found in a farmhouse in the Abruzzon region east of Rome.

Banksy, a British graffiti artist, created the mural as a tribute to the victims of the 2015 terror attack at the music hall.

90 people were killed at a rock concert there in November of that year.

The painting depicting a young female figure with a woeful expression, was cut out by angle grinders while the hooded robbers left via one of the venue’s emergency doors.

A press conference has been scheduled to discuss further details on how the mural was found.